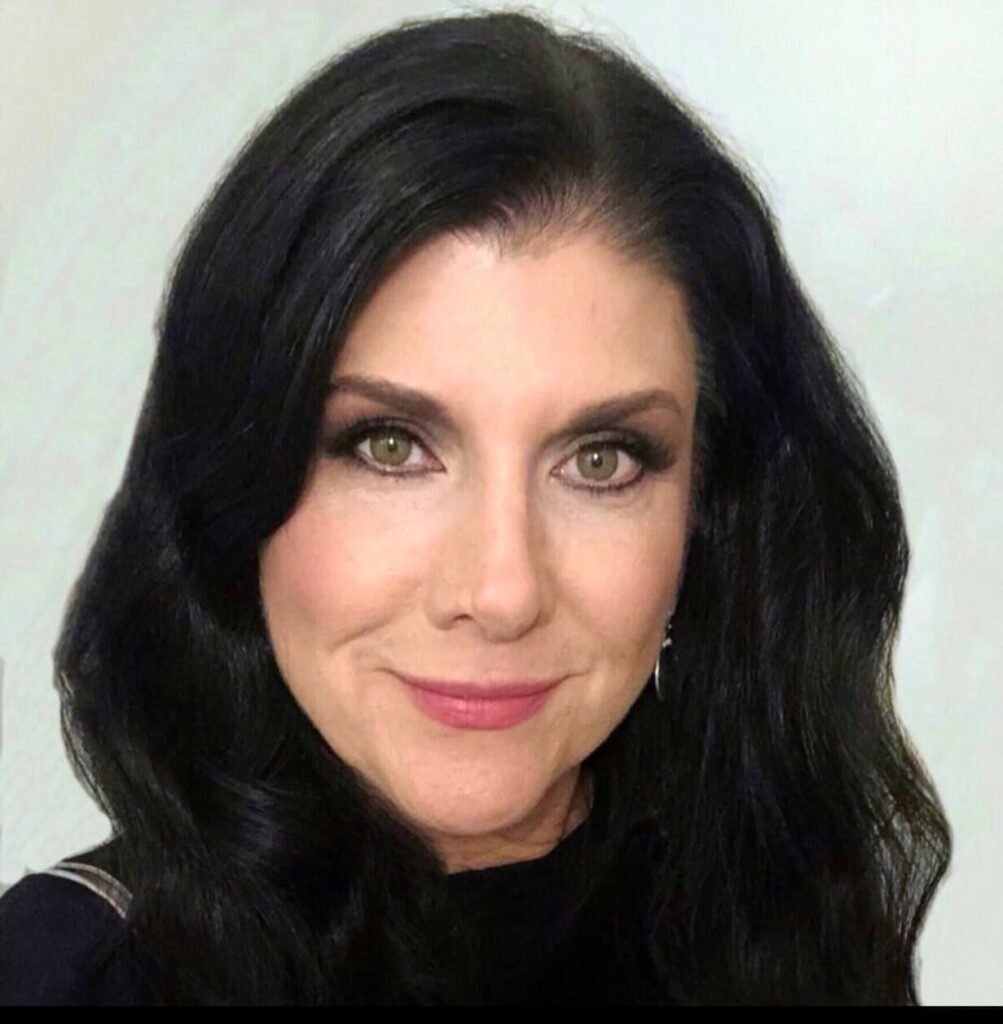 Heroin is an extremely common drug of abuse in the United States, with roughly 1 million people having reported using heroin within the last year.1 Luckily, many effective forms of treatment exist to help people overcome their addiction to heroin and other opioids.2 Professional treatment has helped many wishing to recover from mild to severe heroin addiction and achieve long-term abstinence from this drug.3

Though the factors that influence heroin development may vary from person to person, the end result is the same: an inability to quit continued heroin use despite the adverse consequences of the drug. People suffering from a substance use disorder (SUD) may spend significant time searching for heroin or other drugs. Professional treatment interventions can keep people safe and comfortable during detox and withdrawal and promote lasting sobriety through long-term recovery

Heroin is an extremely addictive opioid drug that can produce significantly pleasurable cognitive effects.4 Heroin is considered a depressant as well as a Schedule I drug. This means that there are currently no accepted medical uses for heroin and there is a high potential for abuse. Heroin is synthesized from morphine, an opiate substance derived from certain types of poppy plants. While poppy plants are typically grown in Southeast and Southwest Asia, Columbia, and Mexico, heroin is available in practically every part of the United States. 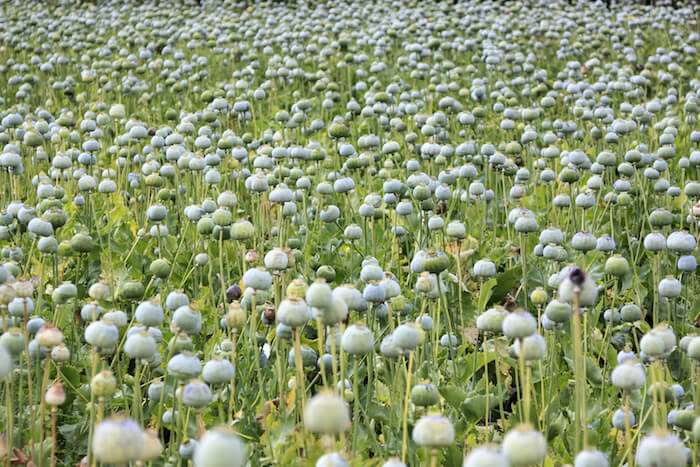 Heroin may be referred to by its various street names such as H, horse, smack, and hell dust. Heroin is commonly manufactured as a white or brown powder. Some people may “cut” (or mix) heroin with other substances, such as baby powder or cornstarch, and some heroin is processed into a sticky substance called black tar. In its various  forms, heroin can be snorted, smoked, or mixed with water or other liquid solutions to be injected intravenously.4

When someone uses heroin, it activates opioid receptors in the brain which ultimately results in altered pain perception and a rush of rewarding, euphoric feelings.5 An accompanying surge of dopamine in the brain reward center reinforces continued heroin use — often compelling the heroin user to want more of this drug and crave experiencing its high again and again.1

Dependence, Withdrawal, and How to Know if You Need Treatment

After a sustained period of use, someone may develop significant opioid dependence. When someone has become physically dependent upon any substance, it means that their brain has adjusted to regularly having a certain level of this substance in their system. When someone who is dependent upon heroin stops using this drug, they may experience unpleasant withdrawal symptoms.

In addition to developing opioid dependence, people who use heroin commonly build significant opioid tolerance, meaning that increasingly large or more frequent doses of heroin may be needed for them to experience the sought after high.

This can be dangerous for many reasons: First, the more often someone uses heroin, and the more heroin they use, the more likely they are to overdose. Second, people who may have started smoking or snorting heroin may be prompted to start injecting the drug to more quickly elicit an intense high. Intravenous heroin use can also lead to overdose, but may also increase the risk of skin infections, certain cardiovascular issues, as well as various blood borne illnesses, such as HIV.4,7

When someone is physically dependent upon heroin and then tries to stop using it abruptly, they may experience a myriad of uncomfortable and distressing withdrawal symptoms. The physical symptoms of of heroin withdrawal, such as diarrhea, vomiting, achy muscles and bones, and chills, can often make it more challenging to quit because the person may be tempted to resume using the drug to delay or otherwise decrease the unpleasant sensations of withdrawal.4Professional medical detox and withdrawal management efforts can go a long way to make this initial period of recovery much more comfortable for individuals seeking to quit heroin.

How to Know if You Need Heroin Addiction Treatment

Substance use disorders are treatable and can be managed successfully with the proper attention and treatment.8 You may already recognize certain signs and symptoms in yourself that suggest that you might be struggling with an opioid use disorder, such as cravings to use heroin, failing to manage use, continuing to use despite adverse consequences, and experiencing unpleasant withdrawal symptoms when use slows or stops; however, it may be best for you to consult with a doctor or other treatment professional when determining what level of heroin addiction care would benefit you the most.

Heroin addiction treatment at American Addiction Centers can be customized to fit a variety of populations in need of substance abuse treatment. Indeed, treatment tailored to individual needs can be crucial to success in recovery.9 While some people may need more intensive care, others may demand more flexibility for their treatment duration due to work responsibilities or other obligations.

What is the Difference Between Heroin Tolerance & Dependence?

Heroin tolerance occurs when a person no longer responds to the drug dose used previously and needs more of the drug to reach the “high” they seek. Dependence, on the other hand, is when a person stops drug use and experiences withdrawal.

What is Heroin Addiction Treatment?

Many people wishing to benefit from professional substance abuse rehabilitation. Treatment for heroin abuse can help a person stop using heroin (and remain abstinent) so that they may resume a healthier, productive life in the longer-term.

Despite heroin’s highly addictive nature, many have undergone successful treatment for opioid use disorders. Through a combination of behavioral therapies that promote positive thought patterns and behaviors, and medication to manage withdrawal, people can begin long-term recovery.9

Heroin Treatment Settings, Levels of Care, and Types of Therapy

Heroin recovery efforts often begin with a period of medication-assisted detoxification. Medical detox helps to manage withdrawal and stabilize a person in early recovery, but is only the first phase of more comprehensive treatment efforts.

After the completion of detox, a person may continue on with a longer period of treatment in either an inpatient or outpatient setting. With inpatient or residential treatment, you would reside in a facility and receive treatment 24/7. Addiction treatment could also continue through various levels of outpatient treatment—including partial hospitalization programs (PHP) and intensive outpatient (IOP) programs— while you continue living at home or in a sober living home outside of treatment hours. However, no one type of treatment is right for everyone. Instead, your treatment program will be customized for you based on your individual needs.

There are many therapeutic approaches to heroin addiction treatment. A common type of therapy offered in addiction treatment is cognitive-behavioral therapy (CBT), in which people learn to think differently about drugs and develop skills to prevent relapse.9 A large focus of CBT is figuring out why you use heroin and how to cope with these triggers in different ways that do not involve drugs. For adolescents, their family unit is a focus of their treatment plan. Family behavior therapy helps loved ones learn to set boundaries with adolescents and to work through the problems that may be triggering adolescent substance use.

One of the key components of effective treatment is aftercare and routine follow ups with treatment providers. Aftercare and relapse prevention programs impact the success rates of treatment. Most people who relapse do so within a year of leaving treatment.10 Research has shown that having a support network of people while you are in recovery can help you remain abstinent from drugs.11

Aftercare helps to reinforce the lessons one learned in treatment and provides a network of sober peers from whom you can learn and gain support.12

How Long is Rehab for Heroin Treatment?

Heroin detox can last on average between 5 to 10 days in total. Rehab duration will vary depending on the severity and treatment program. Inpatient programs can last between 30 and 90 days. There are also longer term rehab options for those who need it as well.

Who Helps During the Rehab Process?

Licensed healthcare professionals such as psychiatrists and primary care providers may help in the rehab process.

Several medications may be used to help treat people with opioid use disorders. These medications may lower someone’s risk of relapse and increase abstinence rates in people who are in recovery from heroin addiction.

Opioid agonist medications can be used to stabilize someone experiencing heroin withdrawal and also help to maintain someone through a longer-term recovery period by diminishing cravings and other unpleasant symptoms.13

Two medications widely used in the treatment of heroin and other opioid addictions are methadone and buprenorphine.

Methadone is an opioid agonist, meaning that it binds to and activates opioid receptors in the brain similarly to heroin and other opioids of abuse. When used in accordance with treatment guidelines, methadone will not result in the pronounced euphoria that is associated with heroin or misused prescription painkillers.13

Therefore, those who use methadone do not experience the high that would typically accompany heroin use, but experience a relief of withdrawal symptoms and cravings as they work on their recovery. Only specialized treatment programs and clinics are approved to dispense methadone.13 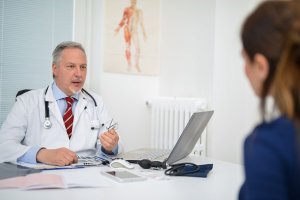 Unlike methadone, buprenorphine does not need to be administered through specialized clinics. This medication can be prescribed by specially qualified physicians and nurse practitioners. Buprenorphine is often offered as an option in medication-assisted treatment (MAT) programs at drug rehabs across the United States.13

Opioid antagonists, such as naltrexone, function by blocking opioid receptors’ ability to become activated by another drug. In other words, naltrexone is able to block some of the euphoric effects of other opioids like heroin, should they be used while on naltrexone therapy. Naltrexone may be administered daily in pill form. However, a long-acting intramuscular injection form of naltrexone, called Vivitrol, is also available to those who would prefer a monthly shot instead of taking a pill.13

The type of medication someone uses to help them recover from an opioid use disorder is based on their unique circumstances and needs. Because some people may respond better to certain medicines, it may be best to seek out a medical provider to talk about which MAT options are best for you.13

People suffering from heroin addiction may exhibit certain tell-tale signs of their drug abuse. Some of signs and symptoms associated with heroin are physical, while others are more emotional or behavioral. The effects of heroin abuse can result in physical signs such as:

People who are using heroin may sometimes experience malnutrition and unhealthy weight loss. They may be secretive about their drug use behavior (e.g., they may start to wear long pants and sleeves to conceal their track marks).14

Those using heroin may own drug paraphernalia, or items that they use to ingest heroin in some form, such as needles or pipes. People who become addicted to heroin may also become depressed or develop antisocial personality traits.4

Facts and Statistics on Heroin Addiction 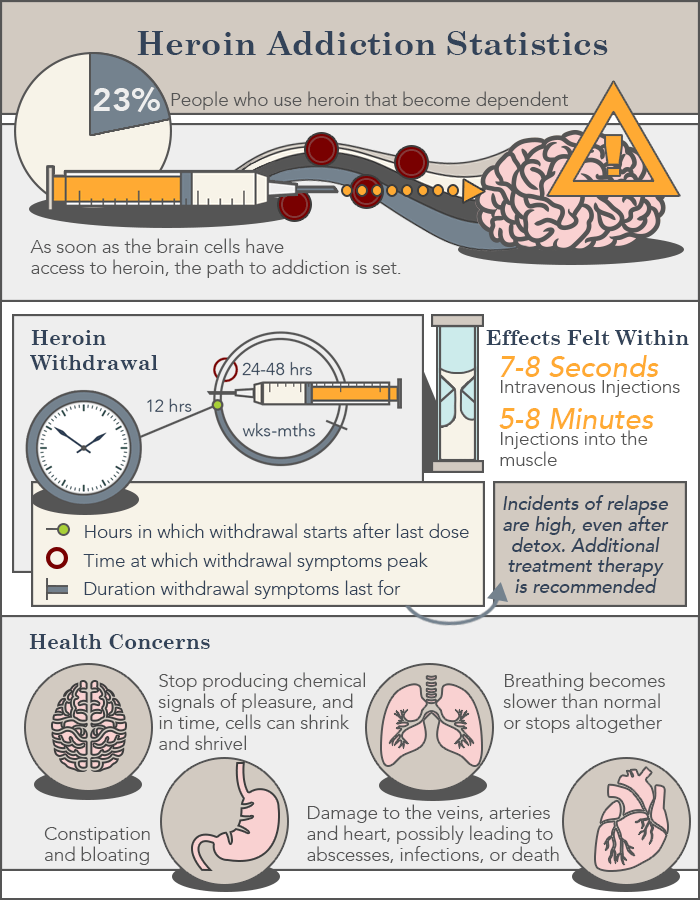 Effects of Heroin and Heroin Abuse

Heroin can have many negative effects on a person’s mental and physical health. The short-term effects of heroin use can include:1

People who regularly use heroin are also at risk for developing long-term effects of heroin use, including the physical symptoms of heroin addiction, such as:4

People who inject heroin also have an increased risk of developing the following health issues:4

Find Heroin Treatment Centers Near You

As noted earlier, treatment is best when customized, and no one treatment fits every person. You can start on your path to recovery by researching treatment programs and outcomes and discussing with your provider what course of treatment is best for you and your needs.